I was pretty excited about the past weekend. Big head high swells a couple storms here and there to smooth things out. Also to add a little spice to the weekend I committed myself to only using the short board.

My frustration began 5 minutes into my first session. I'm not sure if I psyched myself out, but I didn't catch one wave. And if I'm being honest, I think I was fearful. The waves at the point were about chest to head high with some chop due to the wind and I was on my short board.

Maybe it was my lack of experience on this new board, maybe it was the fact I was tired from working out at the gym all week, maybe it was because I was stressed at work all week. Regardless of what it was, my mind was not there and my body followed suit.
The second session of the day went much better. A storm passed and really cleaned things up. I still didn't catch any waves, but I came close. By that point I was just exhausted and was starting to panic a few times when I was kept under for and extra second or two. Got thrown over the falls onto my board two times. I called it quits for the day, feeling defeated and a bit broken.

That Sunday a big swell came through again. This time we had the added charm of heavy fog rolling in. I didn't know you could play Marco Polo while surfing. 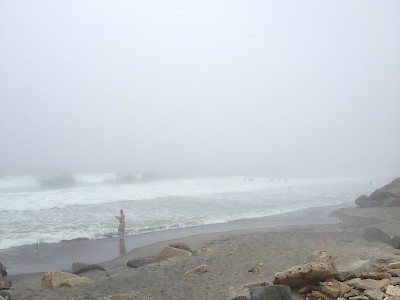 So another four hours of frustration. Not a wave caught. Well, actually, I did catch waves, I just didn't get to ride them properly. I would say a solid 6 waves where ridden on my belly. and another two I made the drop but could make the wave. My friend asked me what I thought my problem could be. I surmised it was the timing. I just wasn't popping up at the the critical moment. Either I was too late or too early.

At the end if the session we all decide we were beat and took in our last waves. And that's when it happened. I dropped down a wave going backhand, popped up and rode it on in. I think I had an orgasm. My friends that were waiting on the shore to leave where hooting and hollering. My personal cheerleaders. They understood the grief I had all day.
Since my buddy hadn't taken his last wave in I decided to paddle back to see if I could catch anything else. And sure enough, I caught another wave. By that point it was done.

We left and ate at surf taco.